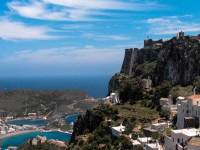 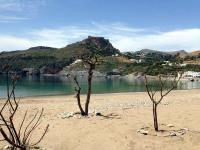 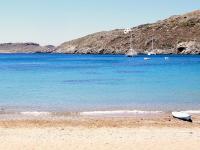 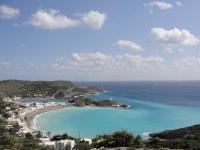 Our tour of Kythira begins at 08:30am, where we will board the coach and travel to Aghia Pelagia.

The seaside settlement of Aghia Pelagia belongs to the developed tourist areas of Kythira. It is located in the northern part of the island, 26 km away from Chora.

The beautiful beach of Aghia Pelagia is organized (with umbrellas and sun beds) and offers water sports and beach volleyball. The port of the area was used in the past as the main port of Kythira with connections to Neapolis in the Peloponnese, Gythion, Monemvasia and AntiKythira.

Our first stop on the tour will be the Potamos settlement. We will get to the village passing by the picturesque village of Karavas. The village is considered as one of the most beautiful on the island. It has several traditional houses influenced by the traditional architecture of the Peloponnese. It consists of many hamlets built amphitheatrically on low hills covered with olive groves, and amidst a beautiful natural environment with lush vegetation, tiny ponds surrounded by plane trees and running water from numerous springs.

Potamos is situated in the northern part of the island. Old mansions, neoclassical buildings, scenic alleys that run under well-rounded arches along the main street, the cafes, the colorful shops and the rich shop windows are the highlights of Potamos, the largest village of Kythira. The main square is emblazoned with rich history. Its delightful layout is surrounded by buildings eager to offer relaxation, refreshments and delicious treats to the visitor. Nearby lies the Panagia Ilariotissa church, or Kyra (Lady), dedicated to Virgin Mary, as referred to by the elders.

Every Sunday, the Potamos main square hosts a traditional open market where products from the rich Kytherian land and traditional art items are sold directly by producers and manufacturers. This century-old custom offers the opportunity to the numerous visitors to blend well with the Kytherians making thus known the island’s tradition and culture.

Our next destination is the village of Mylopotamos., situated to the west of Kythira. Mylopotamos is one of Kythira’s oldest villages and for this reason it has been defined as traditional settlement by the Archaeological Service. We will visit the impressive “Fonissa” or “Neraida” waterfall, where the water used to fall from a height of 15 metres. (Unfortunately, this has dried up due to the low rainfall during the last 3-4 years).

Of great interest also are the green gorge of the watermills, the central square with its over a century old plane trees and the impressive belfry of the 19th c. church of Aghios Charalampos. At this point we have approx. 30min of free time for a refreshment in the main square.

Our next stop on the tour will be the island’s capital, known as Chora or Kythira.

Chora will definitely impress you as you stroll through its picturesque main strip with cafés, shops, houses and the church of “Estavromenos” (Church of the Crucified Christ).

Continuing on, we will arrive at the impressive 16th century Venetian Castle or “Castro”, from where the view as far as Crete is simply breathtaking! We recommend you a visit to the castle museum, where a collection of coats of arms is hosted, narrating the history of the local nobility,(admission €2/person).

Here you will have some free time, where you can browse Chora’s eclectic mix of shops or even sit down to enjoy a coffee and local sweets. Also, worth seeing is the “New Archeological Museum of Kythira”, which opened recently after the old museum was damaged by the 2006 strong earthquake.(admission 4euros/person)

Next, we will board the coach and continue down the steep, winding road to Kapsali, the port of Chora. Kapsali was the old port of Kythira, where ships moored when a northerly wind prevailed. However, it is now only used as a port for tourist boats or yachts.

It has a permanent population of 55 people, but in the summer it buzzes with life as people swarm to the village for its magnificent beach and its busy slate-paved waterfront promenade full of cafés, bars and restaurants!

Finally, after spending approx.. two hours in Kapsali for lunch or swimming we will return to our accommodation.