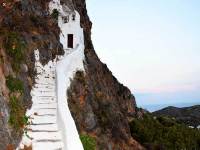 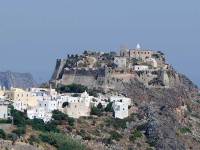 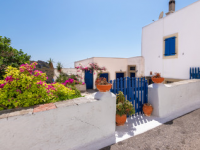 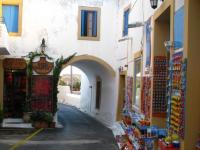 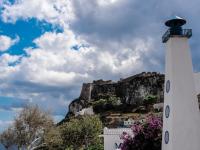 Departure from the accommodation towards Kapsali.

Saint John on the cliff

Our bus will drop us off in the junction of the main road from where we will have a 10min walk (uphill) until we reach the bottom of the 100 steps that lead us up in the chapel of Saint John on the cliff.

The small complex, which until the 19th c. was a monastery housing a limited number of monks, consists of a natural cave with stalactites in which –according to the local tradition- Saint John the Theologian inspired the Book of Relevation (Apocalypse), but he wrote it –after having left Kythira- at the island of Patmos. In the following centuries the cave was used as a church dedicated to Saint John and various buildings were annexed to it in various periods in order to be used by the monastic community.

The cave and the complex in an unspecified period took the name Saint John on the cliff, due to the very precipitous terrain on which the religious buildings were added. The view from the monastic complex towards Kapsali, Chora and the sea is unique.

After a 30min visit we walk back to the coach and depart to Chora (10 min drive).
Arriving in the capital of the island; disembarkation.

Firstly, we will visit the Archaeological Museum in which we will see very interesting exhibits. The Archaeological Museum of Kythera is housed in a building measured 191,53 sm which is located in a plot of 989,955 sm in the city plan of the capital of the island, Chora. The Museum is located on the main road at the entrance of Chora and in very short distance from the central square of the small town.

After the earthquake that struck the island in 2006, the Museum was badly damaged and it was closed to visitors for a period of nine years. The Archaeological Museum of Kythera re-opened for the public on the 8th of May 2016, fully restored and with a modern exhibition.

The building features modern infrastructure, free internet access for visitors and it is also accessible to disabled persons and to visually impaired people.After visiting the Museum, we will walk through the picturesque adulated lanes and tour with commentary into the Venetian castle enjoying also the magical view towards Kapsali and the chapel of Saint John.

Free time for shopping – we suggest to taste the famous Kytherian rasks (paximadia) and fatourada (local alcoholic beverage with cinnamon and carnation); we also suggest to buy the famous “sempreviva” (yellow dry flower which lives forever and grows exclusively in Kythira).

The Venetian Castle was completed in 1503 and could accommodate not only the garrison, but also the Governor of the island and large numbers of civilians.

Within the area of the Castle we will have the opportunity to see the remaining old buildings, the churches, the cisterns and the very old tower which was constructed before the Castle itself. We will also have the opportunity to see the area on the eastern slope of the Castle with the large number of churches and the remnants of another external defensive wall as well as listen to the story of the whole area from the Byzantine period to the late 19th century.

The tour will end at the area of “Belvedere” (place with nice view) and then we will get on the bus to return to the accommodation.

Our tours are on a private basis only. Please contact us for availability and prices.